View all products by LeapFrog
Log in to add this to your Wish List
Twist, turn, play and learn with the RockIt Twist™ rotatable, single-player game system with three profiles!
Four sides of colourful, light-up controls include buttons, dials, a spinner, slider, switch and D-pad to provide a totally unique way to play exciting video games. During game play, one of the eight game controls will light up to indicate when each control is needed throughout a game.
Nurture three adorable virtual RockIt Pets™ that hatch and grow from eggs. 12 preloaded games across five game play categories have three levels of difficulty that help kids learn skills including literacy, math, problem solving, science and creativity all while having fun! Since there’s no need for Wi-Fi, kids can play anywhere.
Listen to your own music with the built-in MP3 player. Volume controls and a headphone jack are also included. Game packs (sold separately) include more games, plus a new virtual pet and a RockIt Pet™ figure to match.
For ages 4-8 years. Rechargeable batteries included.
Features: 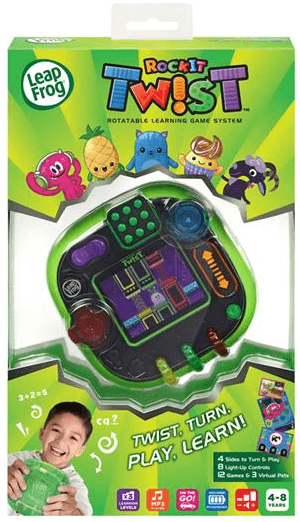